With the plot around entertainment, school and teacher shown in a unique way, movie-goers can be sure of a meaningful lesson to take away in this latest Vietnamese comedy movie. The movie talks about the story of Hoang and villagers’ lifestyles in a faraway island from the mainland in Vietnam. Hoang is a young aspiring man who dreams of becoming a music star. Because he hasn’t been able to succeed yet, so he is working as a music teacher in the school while continues to pursue his life goal.

After being scammed, Hoang has to force himself to take up a teaching gig in an island far away from the mainland. Feeling that the life there is intolerably poor, Hoang tries to leave the island few times, with each attempt being  failed as the villagers and students always try their best efforts to keep him.

By the time Hoang begins to adapt to the rural lifestyle set upon in the island, it is also the time when the opportunity to become a star finally arrives and he has to make hard choices. 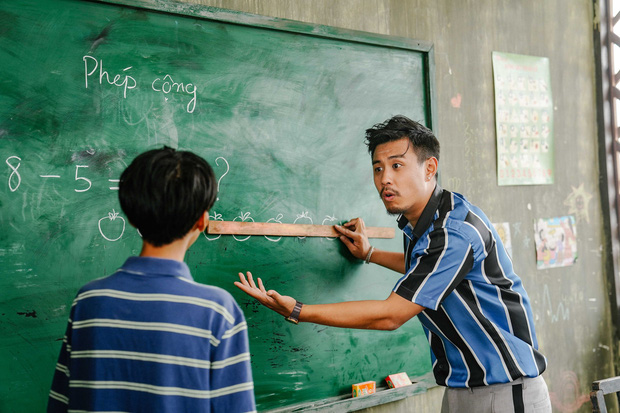 Hoang (Huyme) become a teacher in the remove island.

The film brings about a meaningful lesson to everyone; to be always positive, be strong to deal with the types of different difficulties in our life.

Even though life can be full of troubles, but the way that we perceive and handle them are far more important than running away.

Besides, the story also talks about the endearing relationship between a teacher and his students that surpasses more than what can be learnt in the textbook.

Besides the engaging plot and strong cast, the natural sceneries screened throughout the movie are worth to be mentioned too. The scenery in the movie is so beautiful!

“Superstar Teacher” is scheduled to officially premiere at all local cinemas from August 30 onward.