After nearly 4 months of broadcast, V-drama “Ve Nha Di Con” (Translated: “Go Back Home, My Daughter”), the 85-episode family drama created a storm from the small screen to the social media.

The story of the man, Mr Son, who takes care of his 3 daughters, has received a lot of love and support from the viewers. Throughout 85 episodes, there were countless ups and downs that really enabled its viewers to reflect from the fictional story back to the reality world. In the end, Vu changes his personality. He knows that he loves Thu a lot as he tries to find the way to express his love to her.

The way that he confessed his love is so romantic. Vu asked Dung to invite Thu to the beach (Thu thought that she would meet Dung there), the place where Vu and Thu first met each other. At that spot, Vu surprises Thu when she is at the beach. He appeared and shelters her with an umbrella and says: “Bon’s mom, be my wife!” (Bon is the son of them).

Duong wears the dress that father Son gave, and the latter explains about giving 13 dresses.

In the first few episodes, father Son attends Duong’s birthday to give her the dress, he did the same for 13 years. And Duong, she always blames her father. But after all, both of them later give in as Duong wears the dresses that her father gave and they hug each other. Quoc confesses his love to Hue In the drama, Hue is the biggest sister in the family, and she got married with Khai. Unfortunately, he is a bad man, He ill-treats Hue until she couldn’t stand living with him anymore and later they break up.

After the broken marriage, Hue becomes stronger, and she goes back to her dad’s home and lives with her sisters and father. Then she meets Quoc, and both fall in love with each other.

In the last episode, Quoc proposed to Hue, to which she smiles happily in agreement. 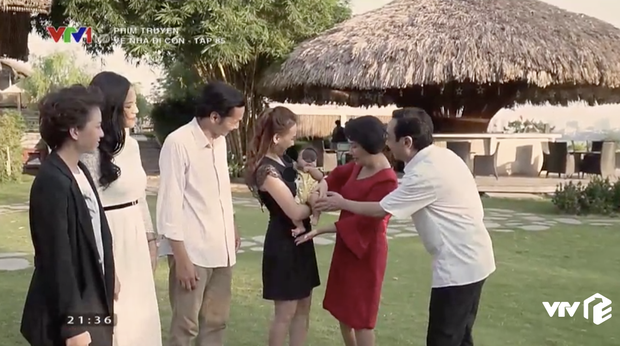 The drama ends with the happy gathering of all the characters. Mr Son accepts Vu again as his son-in-law, Thu told his father to rest assured that he would live next to Vu. Quoc formally proposes to Hue, becoming Son’s son-in-law.

A perfect ending for everyone.

In this article:Ve Nha Di Con