There is actually a luminously exquisite attraction to visit at night in the central Vietnam, Da Nang.

Da Nang is a globally recognized touristy city in Vietnam as there are more than plenty of interesting places that never fail to attract local and foreign visitors all year round.

During daytime, Ba Na Hills impresses visitors because of its unique landscape, as if it’s a fairyland. At night, one such place not-to-be-missed will be the Dragon Bridge, that was opened to the public on 29 March 2013. 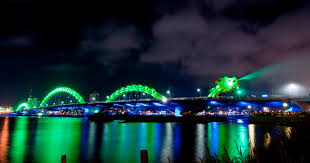 The modern bridge was named as the Dragon Bridge for a specific obvious reason – a gigantic sculptural dragon was built along with it.

In particular, the bridge was designed by the US-based Ammann & Whitney Consulting Engineers with Louis Berger Group. With a length of 666 metres long and 37.5 metres wide, it caters six lanes for road traffic. and has six lanes for traffic.

At night, the Dragon Bridge is illustriously charming in its own majestic way under under the dark night sky. Not only it can breath fire and water, it is also installed with a contemporary light system, to enable changing colors for different themes; sometimes green, sometime blue, sometimes yellow, and so on.

The grandeur of the Dragon Bridge in Da Nang is surely going to captivate you for the rest of the night.

In this article:Danang, The Dragon Bridge